Founded as Mix-Tape (hyphenated) in 2019 and re-founded as Mixtape in 2020, Mixtape Social Music (Lehi, Utah) is a premier streaming platform – a mix of ” future nostalgia” curating old-school music and 21st-century functionality. Unlike major music and social apps available for download, Mixtape is not built on stream count or game algorithm; curated playlists and artist-centric collaborations are where the platform really shines.

Last month, TechBuzz sat down with Founder Isaac Ellsworth and Co-Founder and Senior Vice President Rob Duffin to discuss the latest Mixtape updates. (Dave Williams is also part of the founding team.) Since TechBuzz’s first Mixtape post on December 1, 2021, the app has gone through a period of strong growth, including new sponsorships and continuous product improvements. The team is also developing more “vital social features” and distribution of the app, while collaborating with grassroots organizations in art, music and fashion.

A brief recap of Mixtape’s features: the platform invites users to sync their Apple Music library, add tracks to create custom playlists, and publish and distribute content to the native stream and surrounding social network . Listeners and remixers can share, comment, and collaborate on selected tracks, and account owners have the ability to monitor, delete, and report comments. Those who don’t have an Apple Music account can still participate in the social part; Mixtape serves up a 30-second teaser for each song included in a playlist. 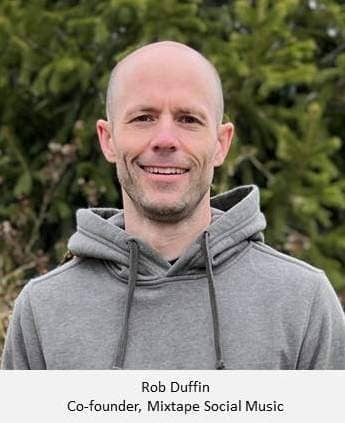 “Mixtape has been this project for years in the making—progress and breakthroughs here and there—but lately it’s just been on rocket fuel,” Ellsworth explains. “We hired Rob to manage the marketing and creative side, as well as a project manager and QA engineer. We raised new funds, developed new app features and launched new partnerships. It was an incredible paradigm shift.

This includes two new industry collaborators: Novak’s House and Punk Rock and Paintbrushes. Founded in 2020 by professional skateboarder and MTV celebrity Brandon Novak, Novak’s House is a rehab residence based in Baltimore, Maryland with locations across the United States. The organization has participated in various art and music projects, including the latest CKY Chronicles graphic novel and Baltimore’s Addiction & Recovery Awareness MusicFest.

Punk Rock and Paintbrushes is a production management company and artist collective. They have produced dozens of artistic and musical tours across the country, including collaborations with Brandon Novak, Green Day and Riot Fest. Along with Mixtape, they will be working on various projects for the platform’s digital art tools, stickers, and playlist displays. 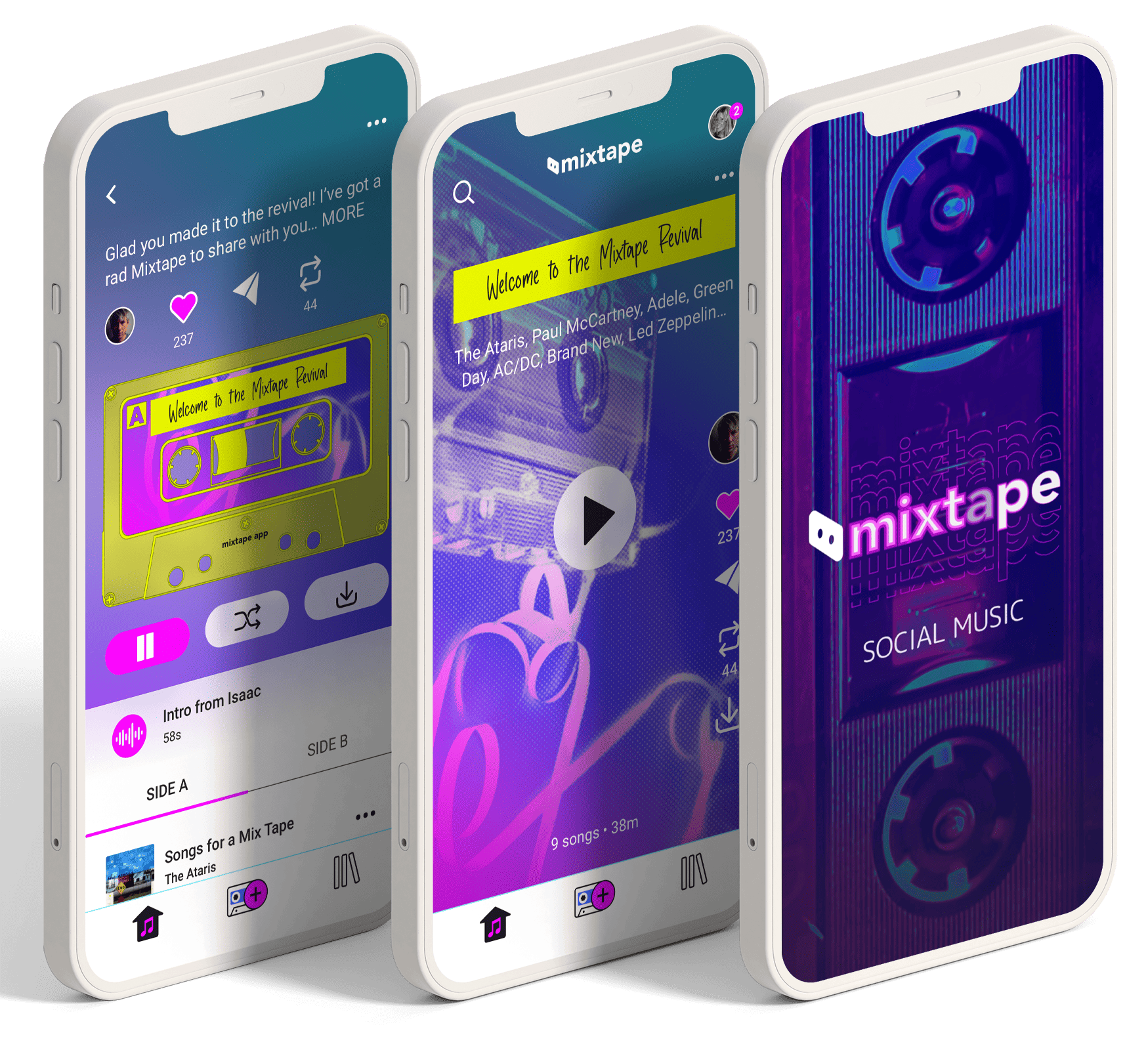 “It’s been such a cool addition to Mixtape: the ability for real artists to add original content to the interface,” Ellsworth says. “There is this crossing of art and music, a global presentation of visual and auditory creations. This element of collaboration and DIY is such an integral part of Mixtape’s history.

“Okay,” says Duffin, “That was really exciting. Everyone from users to industry icons are talking about the app…watching them enter the platform and their eyes light up. What we hear and talk about all the time is, “Wow, not only does the industry need it, but the whole world needs it right now. There’s this power of music and the connection that it has been over the decades. It’s even more powerful to riff in the digital age, when everything seems a little more lost and intangible – perhaps the best you can do is share a playlist or text a link to a song . Mixtape summons those connections we used to have.

Duffin further explains the art angle. “The mixtape is full of nostalgia and the visual presentation is no different,” he explains. “Think back to when you bought a CD or tape; you open the artwork, read the poetry, and browse the group photos – we try to invoke that with a digital interface. As Isaac mentioned with the Mixtape gallery, we add original artwork by musicians and other visual artists. It enhances those little ways that musicians connect with their audience, both tactile and abstract.

A recent artist to collaborate is Mike Gallo (also of Punk Rock and Paintbrushes), who created original artwork for the Mixtape display. The platform connects these works to contributors’ websites, accounts or galleries, allowing artists to directly or indirectly monetize their work. “You can click the menu, go straight to a site, and buy art without Mixtape having its hands in the money pot,” Duffin says. “It’s these types of partnerships that maintain the integrity of Mixtape. We’re not looking to create another extractive social media platform.”

“The same goes for his A&R [artists and repertoire] potential,” says Ellsworth. “Mixtape is becoming a promotional avenue for endorsements, putting new bands ahead of labels – the same way platforms like SoundCloud and TikTok produce viral, but artist-centric work. So many independent groups could benefit from this increase in visibility, especially with a platform that is affordable, easy to use and relevant to their industry. 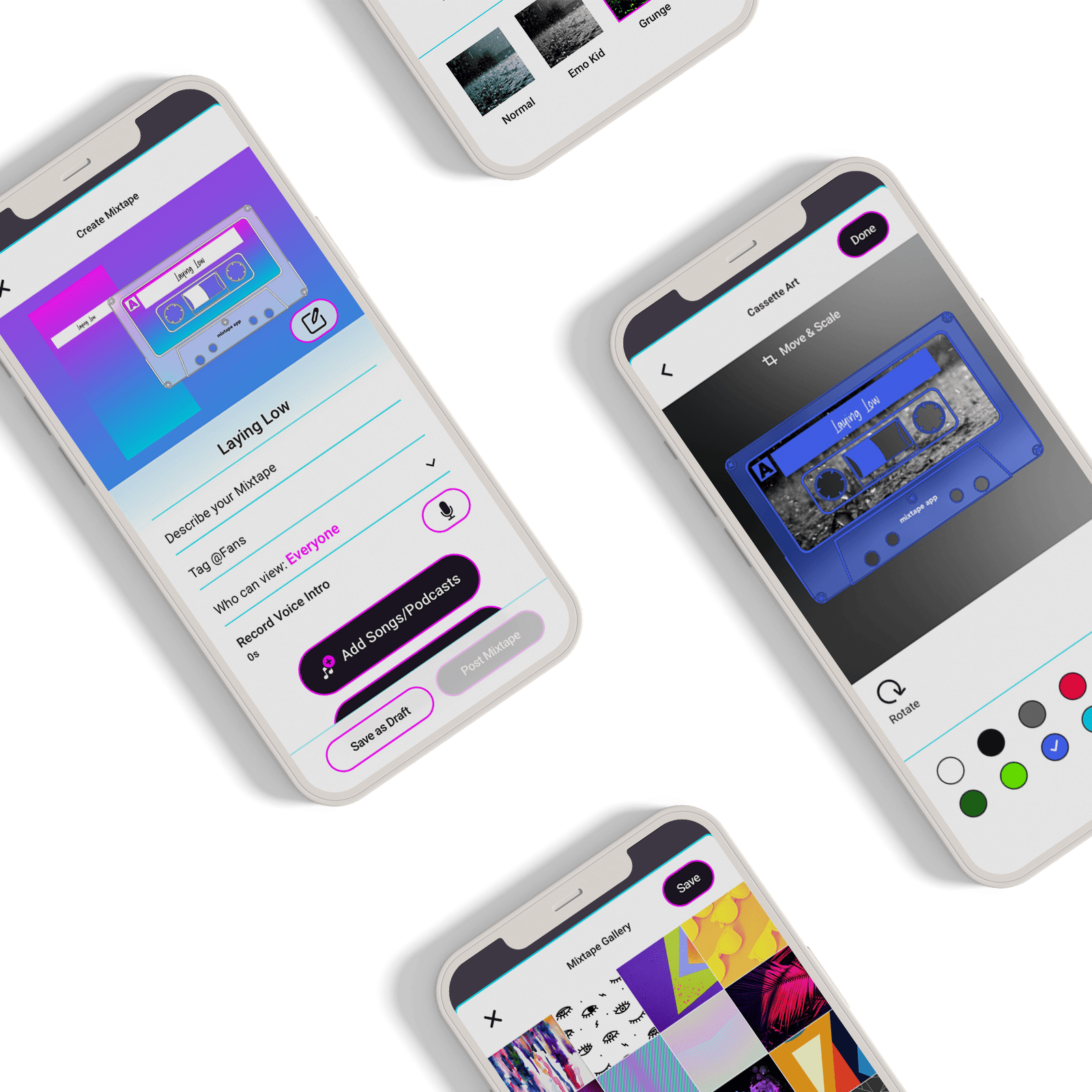 Ellsworth and Duffin refer to the catalytic effects of Napster, a major influence in the formation of Mix-Tape 1.0. “Napster was this complete paradigm shift,” Duffin recalls. “I, for one, love how this whole music world has opened up because of it, but I also know how it’s taken a toll on the industry. Now that things have calmed down and online music streaming is here to stay, I’m excited to be part of a platform working to honor the power of music and treat real-world musicians fairly. We can’t steal music, we can’t steal art, we can’t sell other people’s works. Mixtape is meant to support, not exploit.

Even as new features and integrations are added, these ideals continue to prevail in the branding and functionality of the platform. More than trolldom and monetization, Mixtape is about stories.

“That’s what music is really meant to do: lift us up and help us articulate our experiences,” Duffin continues. “It connects you with others and strengthens your memories and relationships. I think about every relationship that is important to me in my life, and music has played a huge role in that. Mixtape serves as a medium for these connections.

“Well, there’s no room for the chaos and venom of other social media channels,” Ellsworth concludes. “Mixtape is made for music fans, by music fans, and social features follow. I want to see people’s passion for music, their stories and memories, and their love of discovery – no wars over Twitter or “Internet Tough Guys” allowed.Mixtape is where real humans can just gather around music.

Mixtape is now available for download from the Apple App Store.

Under the Radar: Punk Rock and Philosophy: Search and Destroy